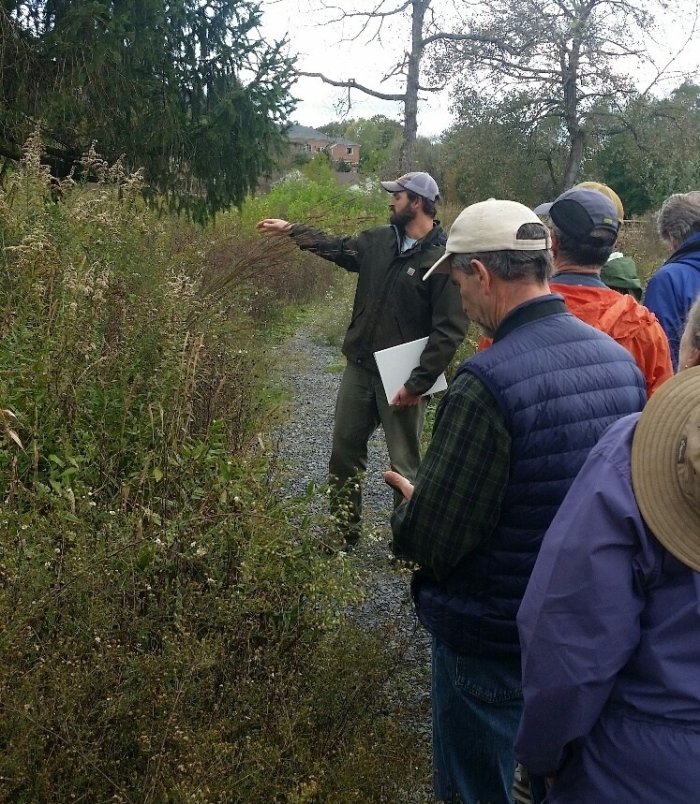 On Saturday, October 20, members of the 2018 HMN Basic Training class explored three sites along the Lost Shoe Loop of the VDGIF Virginia Bird & Wildlife Trail. Class member Lisa Klein describes the morning at Lake Shenandoah below. Lunch and a walk followed at Grand Caverns. The trip concluded with a look at Madison Run.

Twelve enthusiastic members of the current Master Naturalist class met with VDGIF Biologist, Jason Hallacher, to explore the pollinator path at Lake Shenandoah. Jason was instrumental in creating the path and he shared his knowledge and care of the area.

We walked along Lake Shenandoah, starting with the pollinator meadow. Jason talked about the challenges of working with local neighbors, some of whom preferred a neat and tidy lawn. When preparing the land to create the meadow, it was necessary to kill the grass and then plant the seeds that would create a habitat for butterflies, hummingbirds, and other wildlife. There was some discussion of the use of herbicides and the pros and cons of its use in restoring an area to native plants. Grass roots are so difficult to remove that in order to create the meadow in a reasonable time frame, herbicide was necessary to expedite the process.  Jason said that it was possible to kill grass with large amounts of black plastic, but that would take up to two growing seasons to effectively prepare the ground for native plantings. The meadow’s plants were tall and full of seed heads. We did not see any hummingbirds (they had already flown south); there were a few Monarchs and goldfinches, mallards and a kingfisher.

There were bird watchers in the group who spotted coots on the lake as well as a great blue heron who was fishing near a beaver lodge. Unfortunately we did not see any beavers, but Jason assured us that there were several. He said that beavers were not introduced, but had arrived on their own as young adult beavers that left their parents’ lodges and found new places to live.

We did not walk as far as planned because there was so much to look at along the trail. Jason pointed out which plants were native and discussed invasive species.  Jason did an amazing job of explaining the area around Lake Shenandoah. Many of the participants plan to return to the lake.

Top photo is by Sandy Greene. VDGIF biologist Jason Hallacher is leading the group along the pollinator trail at Lake Shenandoah.

Photos below by Lisa Klein. Click on them for better viewing. 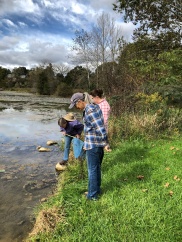 Exploring the shores of Lake Shenandoah.