On Saturday, November 10th members of the HMN chapter participated in the Saw-whet Owl banding at Highland Retreat in western Rockingham county.

Saw-whet Owls are migrating through our area this time of the year from their northern nesting grounds.

Mist nests higher up the ridge are set up near an electronic call, and as the owls fly through the area they are captured and brought down for banding, measuring and aging. The bands and permits to band are supplied by the US Fish and Wildlife Service. The information from the project is added to a database with the US Geological Survey Bird Banding Laboratory. 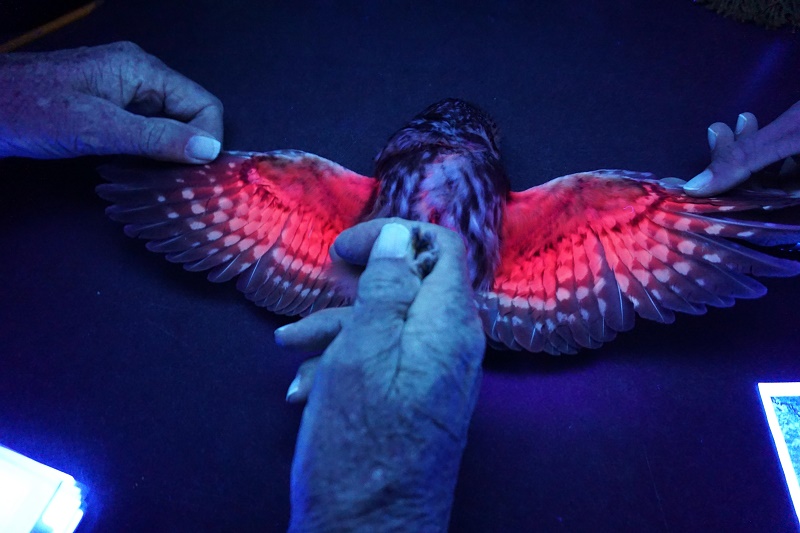 After banding and measuring, the birds are aged using ultraviolet light. Owls and some other birds have pigments in their feathers called porphyrins that fluoresce bright red in UV light. As the feathers age the pigment is reduced and an older bird that has molted some of its feathers will fluoresce less. After the second year, this technique cannot be used to determine age because all feathers are not molted every year. The owls are aged HY (hatching year), SY (second year) and ASY (after second year).

After banding and measuring, the birds are placed on a table outside to recover and continue their journey.

Most of the birds we saw were HY with one older owl. Previously banded owls have been caught including an owl banded near Lake Superior. This year’s recaptures included an owl banded on November 3rd and one banded October 2016 from Peterborough, Ontario.

This year only trained or trainee volunteers are allowed to collect the owls.

On Saturday night over 40 people were there with 13 from HMN, including some family members, and 25 owls were banded.

For more information about the Northern Saw-whet Owl, a good source is the Cornell Lab of Ornithology at https://www.allaboutbirds.org/guide/Northern_Saw-whet_Owl/id.

For more information about the Saw-whet Owls banding project, go to highlandretreatowls.wordpress.com.

Information about the Bird Banding Laboratory can be found at https://www.usgs.gov/centers/pwrc/science/bird-banding-laboratory.

If you find a banded bird you can report it to www.reportband.gov.

All photos are by B. Blessing, II.

Click on a photo below to see a slide show of the photos and find their captions.

Dr. Clair Mellinger holds a bird that has been processed and is ready for release. 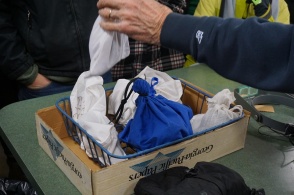 After capture the owls are placed into bags and brought to the lab. 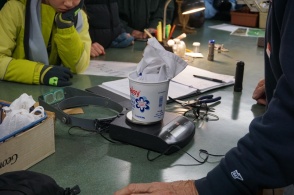 The owls are weighed.

The wings are measured in two places.

After processing this owl is ready for release. HMN John Bauman is holding the owl.

All owls are banded with bands from US fish and Wildlife Service.

Find Elaine Smith’s photos from this event on flickr HERE.