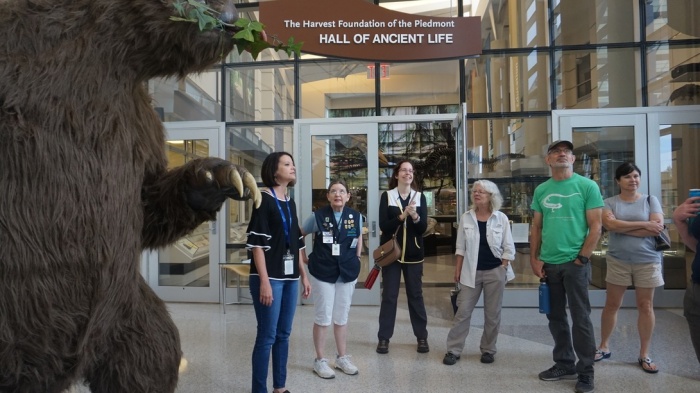 Precipitated by the chance meeting of our Headwaters Chapter’s president and the then president of the Southwestern Piedmont Chapter of the Virginia Master Naturalists at a leadership workshop last fall, members of our Chapter recently enjoyed a full weekend of activities in a distant part of Virginia new to many of us.

Some dozen HMNs and family members gathered at Virginia’s Fairy Stone State Park in Patrick County on Friday evening, June 21. We picked out our accommodations for the weekend ranging from tents and bunk beds in the group “lodge,” to a reserved cabin and RV spot. As it grew dark we were treated to a roaring campfire and tender tunes from a talented trio of HMNs: Burt Blessing, Dave Forrer and John Bauman. They deftly handled requests from our group. Janet James supplied us with the quintessential campfire treat: s’mores!

Morning found us carpooling for the 30-minute drive to the Virginia Museum of Natural History (VMNH) in Martinsville. There we were greeted by several members of the Southwestern Piedmont Chapter who hosted a full day of activities for us. Christy Deatherage is the current president of this local VMN chapter based out of the Museum; she is also the Education Manager for the VMNH. We were fortunate to have her as an experienced guide throughout our day. Divided into two groups, we enjoyed Museum tours, both public and behind the scenes in the morning. Scroll through the photo tiles below this article for more about this. 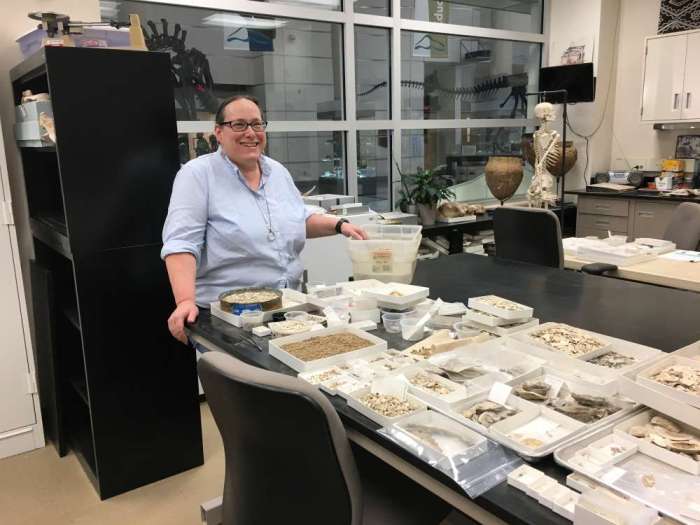 While we ate lunch, the museum’s recent curator of archaeology, Elizabeth Moore, gave a presentation about an excavation she was involved with in the Great Neck area of Virginia Beach in which her team unearthed remnants of a Native American encampment dating back 1500 years. As a “faunal” specialist, Dr. Moore particularly enjoys examining recovered bone and shell shards, since they give us insight into how people lived, what they ate, and what kinds of domestic animals they kept. Read more about the Great Neck excavation efforts from Stacy Parker of The Virginian-Pilot in this article dated December 1, 2015. A pdf version is here in case the online version isn’t available to you.

Dr. Moore is currently transitioning into the position of State Archaeologist in the Virginia Department of Historic Resources, Division of Archaeology.

After Dr. Moore’s talk, we all had the opportunity to help with some of the work that needs to be done “behind the scenes” at the Museum. Dr. Moore has a large number of bags of material that had been excavated from that site in Virginia Beach which we scrutinized for animal-type material, like pieces of bone, shell and fish scales. Other samples that had been collected from the site of an Occaneechi Indian village along the Roanoke River in Pittsylvania County were examined for miniature beads, though no beads were found in our samples.

Dr. Moore also has possession of a “significant archaeological faunal assemblage” saved from the landfill where it was headed before Dr. Moore received grant funding to study these 17-19th century bones and teeth from the Claremont Manor in Surry County. Before they can be studied, the individual pieces need to be cleaned. We were given instructions on how to do this, using toothbrushes, dental picks, and small amounts of water. More about Claremont Manor from the Surry County tourism website here.

A smaller number of us were also given the chance to work in the “wet room”: this is where a large sampling of animals including many reptiles and amphibians are kept in bottles of alcohol and formaldehyde. Our job was to identify the liquid in each bottle, and to top it up if necessary.

All in all, it was an interesting glimpse into what might be called the daily grind of science … a lot of work goes into making that great breakthrough!

Kathy Fell, a member and past president of the Southwestern Piedmont Chapter, was instrumental in organizing this day of activities for us. She met our chapter president Chris Bowlen at a VMN leadership workshop in Charlottesville last fall. Kathy invites all VMNs to help with museum work every Tuesday. Contact her at kathyfell [at] yahoo [dot] com

Garden walk at the home of Kathy Fell. Photo by Elizabeth Pass.

Saturday evening, we were all invited to a potluck dinner and social gathering at Kathy’s lovely and spacious home with other members of the Southwestern Piedmont Chapter. Kathy’s house is surrounded by vast gardens of wildlife-supporting plants accessed by stone walkways all of which she installed herself.

Sunday morning was free time. A few of us hiked to the park’s waterfall, while others went kayaking or headed for home.

In hopes of giving more members this fun and instructive opportunity, our chapter is considering a similar trip next year. Many thanks to Continuing Education Chair Margaret Speicher for her work preparing for this “retreat,” despite being unable to attend herself. All the more reason for a repeat!

– Carl Droms and Adrie Voors, Cohort II, June 2019
With thanks to Kathy Fell for her help with some of the VMNH details!

Photo at the very top is of Southwestern Piedmont Chapter members Christy Deatherage and Gael Chaney with some of our group between tours at the Virginia Museum of Natural History on Saturday, June 22. Photo credit: Carl Droms.

Click on a photo below to see it enlarged, find the full caption, and start a slide show.

Sending out smoke signals from our camp area in Fairy Stone State Park. 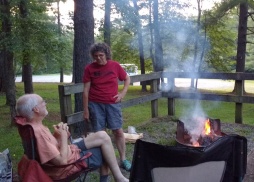 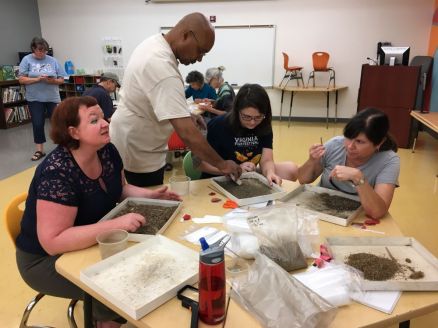 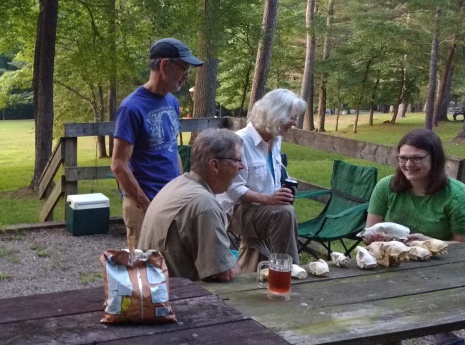 Jenna led us in a game of “name that skull” at Fairy Stone State Park. 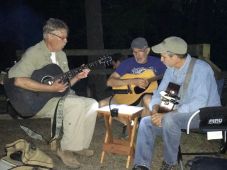 Burt, John, and Dave and their 3 guitars serenading us Friday night. Photo by Elizabeth Pass.

Dave paddling along the shore of Fairy Stone Lake on Sunday, June 23. Photo by John Bauman.

Elizabeth and Dave check out the rock garden in front of the VMNH building. Photo by John Bauman.

Chris and Christy in the Bone Room. Photo by Elizabeth Pass. 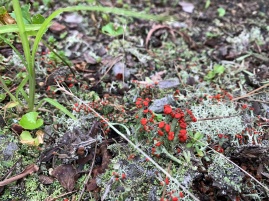 Fresh Water Bryozoans (Moss Animals) in Fairy Stone Lake. “Dave and I found these attached to tree limbs submerged in the lake while kayaking.” Photo by John Bauman. 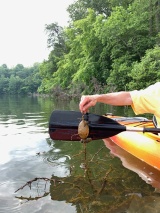 A closer look at the Freshwater Bryozoans by John Bauman 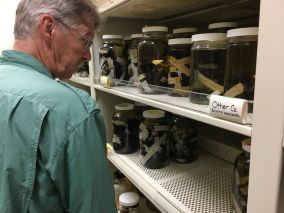 Burt in the Wet Lab. Photo by Elizabeth Pass.

Christy showing Peggy one of many trays of bird skins stored at the VMNH. Photo by Carl Droms. 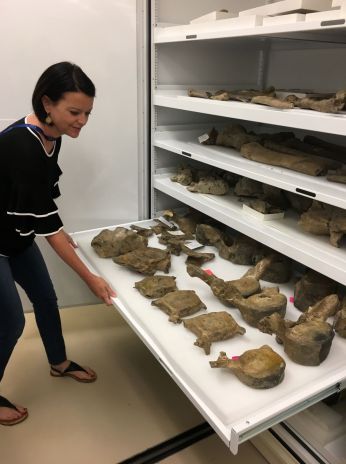 Christy showing us one of the many drawers of bones. Photo by Elizabeth Pass. 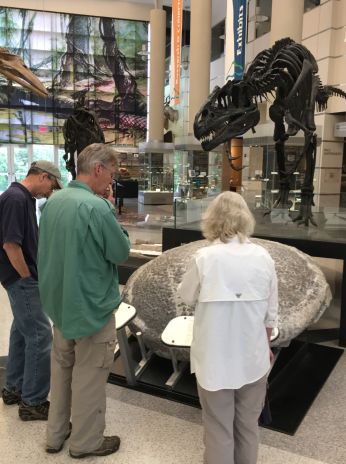 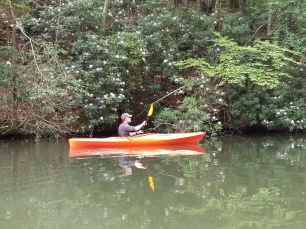 Chris, Peggy, Carl and Adrie followed a park trail to a waterfall on Sunday, June 23.