Held on Saturday, November 12 from 4-6PM at the College’s McKinney Center for Science and Mathematics, members of the HMN Cohort V Basic Training class as well as other chapter members joined Bridgewater College science clubs and faculty in hosting displays and activities to engage and excite young (and older) minds.

Activity and demonstration stations were spread all over the three floors of the building. See below for a full listing of the stations.

Allen Baker, Cohort V, shown above, spent Science Night Saturday helping to host the “Murder Mystery” along with Peggy Plass, Cohort IV. Thanks to Peggy for the photo and Allen for his description of the activity here:

“… (Five) Bridgewater College students (working the station) had collected a group of fish consisting of some that were more tolerant of poor water conditions and some that were less tolerant.  Then they created ‘Bridgewater Creek’ and ‘Eagle Creek’ in two separate aquariums.  One was staged to be ‘polluted’ by placing mostly tolerant species in it.  The other was staged to be ‘unpolluted’ by having primarily intolerant species present.

Each child was given a fish identification sheet, and a tally sheet for each tank to aid them in their research.  The mystery to be solved by the children was to determine, based on the tolerance levels of the fish present in each tank, which waterway was polluted.

As it turned out, by simple dumb luck, the water in the ‘unpolluted’ creek was more cloudy than the ‘polluted’ one.  That made it a bit tougher than originally planned, as some kids determined that one to be polluted based on the water clarity alone.

A number of kids spent a great deal of time working on their charts.  While others blasted through as if it was simply an item to be checked off on a list.  Some, usually the younger ones, were just interested in looking at the fish.

I thought it was a really creative way to engage the kids.  They had to first identify the fish, then chart them based on their tolerance level.  Finally they had to draw a conclusion based on their findings.  Of course the fish performed their shenanigans throughout.  It was a fun project.”

She says: “We had:
• Fossils on display from the Reuel B. Pritchett Museum Collection at Bridgewater College
• Bridgewater College Public History Club students doing hands on paleontology interpretive activities with children
• A visit from the library’s very own T. rex!”

Stephanie with T. rex are in photo at left.

Saber-toothed cat skull with other fossils in photo at right. Thanks to Stephanie for the photos from this activity. 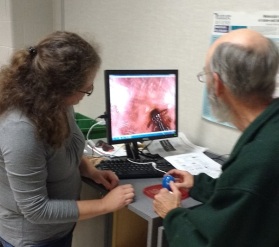