A friendly mix of three dozen night enthusiasts, including families and students, gathered at dusk at the Edith J. Carrier Arboretum at James Madison University on Friday, April 1, 2016, for a “night walk in the woods, star gazing, exploring our senses at night, animal adaptations, keeping the night dark.” HMN Chip Brown coordinated and led this night awareness adventure with help from four other HMNs and volunteers.

The arboretum night walk was one of four consecutive evening programs planned by planetarium director Shanil Virani and English professor and author Paul Bogard for their third annual Starry Nights event to call attention to our increasing loss of the night sky due to light pollution.

Chip and HMN Rob Alexander showed their skills and experience with outdoor education as they led the group in a rousing game of bat and moth. Bandana-blinded designated bats and moths tried to find or evade each other by calling out “bat” and “moth.” Another game illustrated familial voice recognition common to many species.

The group learned about ear adaptations to amplify sounds, how eyes adjust to night vision, and were treated to a story about dancing coyotes in the sky from Chip. HMN Adrie Voors helped Chip show off a street light shielding demo using a Mini Maglite, tablespoon and “boogie” bear lurking in the shadow of the unshielded light. Finally, HMN friend Art Fovargue was able to point out some celestial highlights despite the light pollution and clouds.

photos from the game of bat and moth 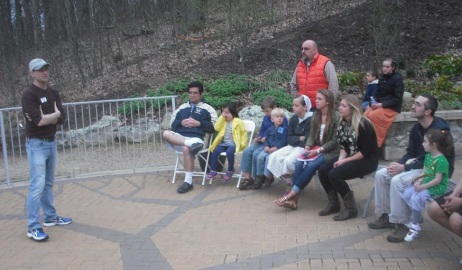