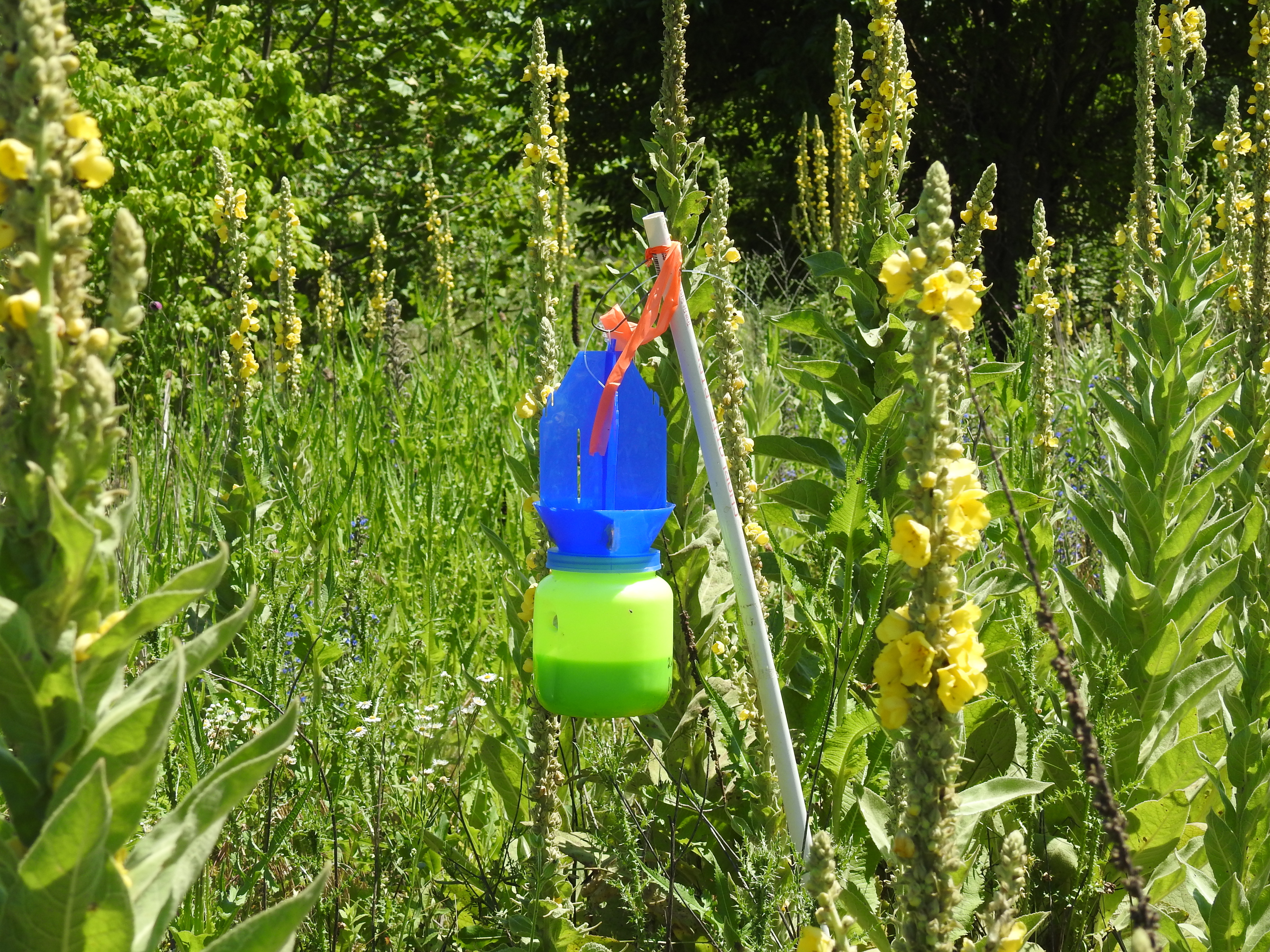 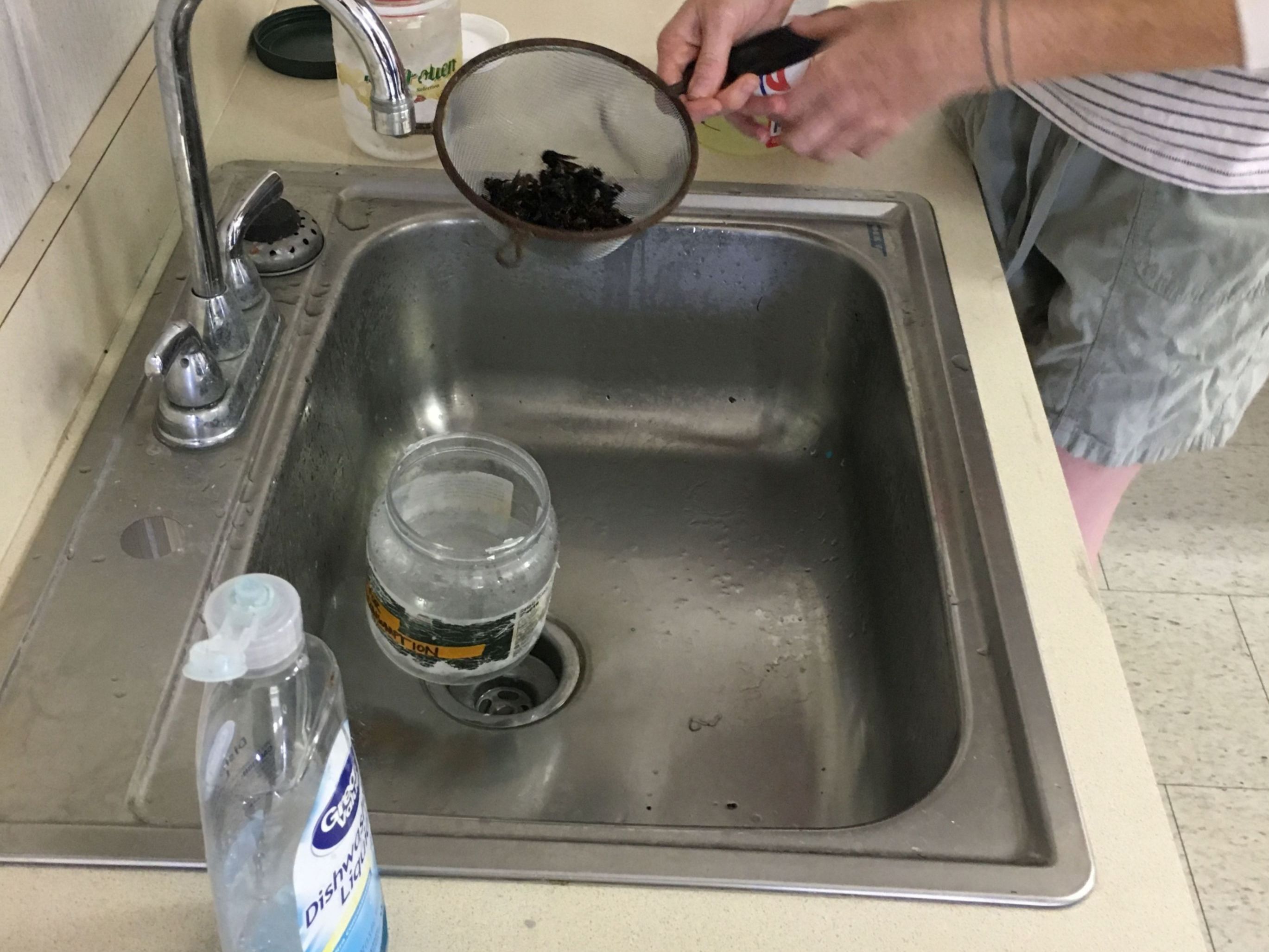 Left: A pollinator trap for collecting bees. Right: Washing the bees; one of the steps in processing them for identification.
Photo by Peggy Plass (left) and Elizabeth Pass (right)

One of the many benefits of working on projects through Virginia Working Landscapes is the excellent education and training opportunities which they also provide. Through the years, several Headwaters Master Naturalists have worked as volunteers for VWL’s pollinator project, collecting field data in support of a survey of local bumblebees. The field portion of the project involves tromping through beautiful fields to retrieve bees who have been drowned in blue vein traps (see photo above left), storing them in alcohol, and returning them to the researchers at Blandy Farm who painstakingly examine and count all of these little animals. The fact that the work is designed to provide a much needed (and previously unavailable) census of bees in the state, and to allow tracking of changes in that population, has always made me feel better about the fact that some individual bees die in the traps.

In addition to the work of collecting and monitoring the traps during the summer season, however, volunteers also have the opportunity to participate in the processing of the bees. This is a place where you can let your inner citizen scientist truly run rampant, becoming part of the process of preparing the bees for identification (and learning how to do some of that identification yourself!).

I once heard a young girl (who had accompanied her mom to one of the bee processing sessions) describe the work as “bee salon,” a fairly apt description Processing the bees begins with opening up the bags (collected during the summer from the blue vein traps) and straining out the alcohol used to store them (see photo above right). Sometimes there are a lot of other bugs in the traps. For example, in one collection this summer, I removed probably 300 june beetles from my blue vein trap. If there are a lot of such non-bee insects in a collection, it’s good to pick those out before beginning the first round of washing.

In the next step, the remaining bees are emptied into a large jar, covered with water and just a drop of dishwashing solution. Some enthusiastic shaking (think washing machine agitation on gentle cycle) ensues. The next step involves rinsing to remove the soap and any other icky parts that might have been remaining. The bees are then poured out into a large kitchen strainer, and head to the drying station. 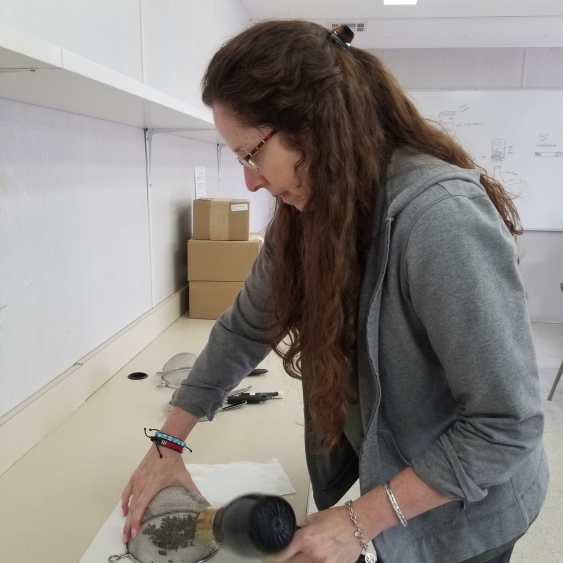 Drying the bees under a strainer.
Photo by Peggy Plass

The strainer containing the insects is inverted onto a paper towel, making sure that everyone is securely “trapped” underneath the “dome” of the strainer, with no legs or wings caught underneath or sticking outside. Then, holding the strainer securely with one hand, one fires up a blow dryer. Bees start blowing around the inside of the strainer in a little whirlwind, and when they all seem to be pretty dry (always hard to tell exactly when that is, but usually when they’re all floating around pretty freely, no clumping), they get moved to the pinning station. 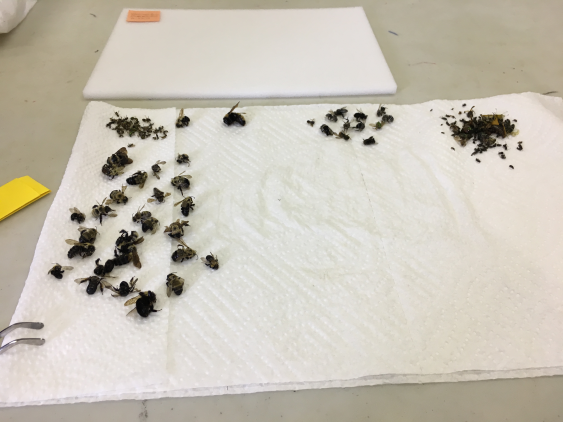 Sorting bumblebees from other bees and insects.
Photo by Elizabeth Pass

Here’s where things get really fun. The study supported by VWL is focused only on bumblebees, but the researchers at Blandy want to hang on to non-bumble bees as well (for possible future examination). So, after the bees are clean and dry, the next step is to sort the bumbles from the other bees (see photo above).  Non-bumblebees are returned to a whirl pack and stored for future examination. Through the years, I’ve gotten pretty good at recognizing which insects are bumbles and which are not (it’s not as easy as you might think!), but there are always professional researchers around to help. The remaining bumbles are pinned in boxes, ready for identification and counting by researchers. 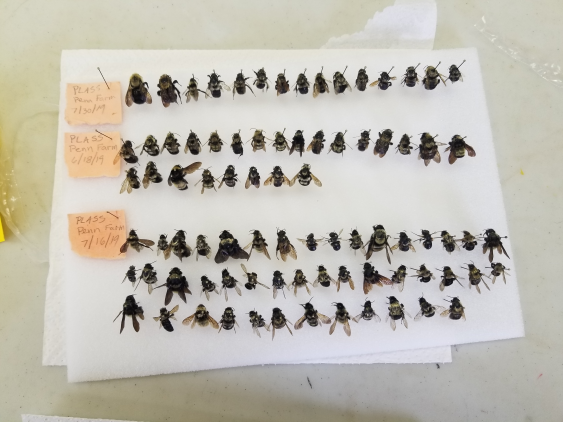 Sorted and pinned bumblebees, ready to go to the scientists.
Photo by Peggy Plass

The researchers at Blandy are amazing folks who generously share their considerable expertise with volunteers interested in learning how to identify the bumblebees. There are a lot of different bees in our area, and the differences in their appearance are subtle, so I admit I’m not very good at this part, but I’ve enjoyed being made aware of what to look for. Being able to be part of the research experience in this way is just one of the many benefits of volunteering with VWL. Watch for reminders next Spring about the opportunities opening for VWL volunteering in 2020!