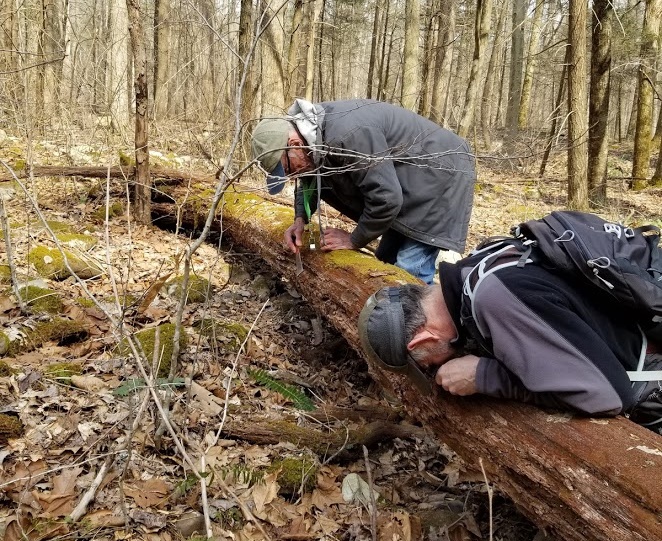 Liverworts are grouped with the mosses and hornworts forming the Bryophytes. All of the Bryophytes reproduce by spores and Liverworts are considered to be the simplest true land plants from which it is thought that all land plants evolved. As Liverworts have been understudied in the state of Virginia, the plant record database overseen by Virginia Botanical Associates is lacking in its county occurrence data. (http://vaplantatlas.org/). For a plant to become included and documented for a county occurrence record, a specimen of that plant has to be collected (rare plants may take different treatment), preserved, identified if possible, and sent to one of the Virginia herbariums.

Upon my learning that Bryophytes have only been sporadically collected in Rockingham County, and mainly mosses at that, it was with that thought that a Liverwort collecting foray should be taken since the opportunity presented itself. Land access permissions must always be obtained which can sometimes be difficult and time consuming, and David Forrer (Cohort VI) was able to get that (via Rebecca Stimson – also Cohort VI) from the Harrisonburg Parks & Recreation folks for the City of Harrisonburg land. So one recent afternoon, David, John Bauman (also Cohort VI!), and I set out to scout around the land bordering the Skidmore Fork and Dry River, about 2 miles downstream from Switzer Dam.

To find and be able to see Liverworts, a loupe is a must-have piece of equipment since the plants tend to be very tiny. And many times it takes magnification to be able to tell them apart from small lichens and mosses. Once the search began, it didn’t take long for us to find different species. With Liverworts’ size they are vulnerable to desiccation, so it’s paramount that they remain moist to keep from drying out. So you search in places that may tend to remain wet. We found them on tree bark, along the wet soil of the stream, growing on roots that stayed moist along the stream, and on certain rocks. I know a good number (maybe nine?) of the plants that we found and collected that day will prove to be county occurrence records once they are identified. When they are, I’ll let David know their names and if they’re records or not.

Top two photos below are both of the same liverwort found by the VMNs on their recent search of a Rockingham County forest. It is being identified for the Virginia Botanical Associates’ database. Bottom photo was not from the trip but demonstrates the growth pattern of some liverworts. Click on any of the photos to enlarge and create a slide show.