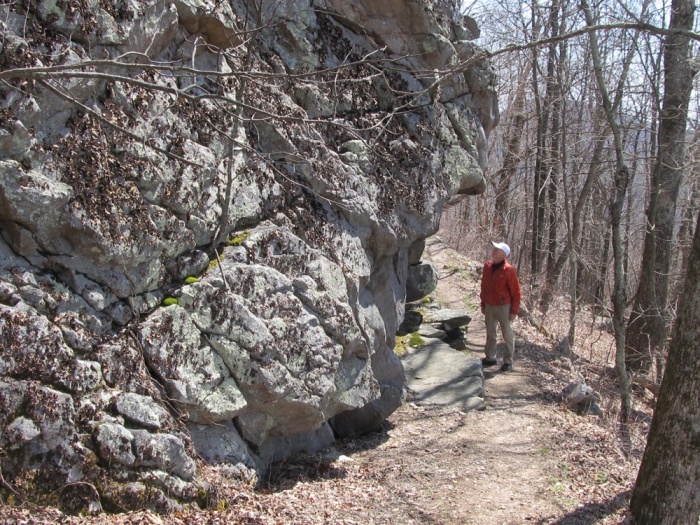 After being snowed out in December and postponed in early April, this field trip was finally held on Thursday, April 12. Malcolm Cameron led the trip with Jerry Hopkins attending.

Malcolm gave an overview of geologic history of the Blue Ridge and Shenandoah National Park (SNP) area and then the pair headed south on Skyline Drive from Swift Run Gap. They stopped at Sandy Bottom Overlook to see mountain ridges with younger sedimentary rocks to the west and an outcrop of Pedlar formation granite, the oldest rock formation in SNP. Next they stopped at Loft Mountain Overlook and examined the Catoctin formation greenstone, formed by metamorphism from ancient lava flows. They spent time examining several interesting features of this rock by the parking lot. The rocks in the stone wall nearby contained skolithos, the only fossil found in SNP. Next they stopped at Rocky Top Overlook which has sedimentary layers from the Hampton-Harpers formation. Their final stop was Doyles River Overlook with a short hike on the AT to see the Weverton formation, metamorphosed sedimentary rock.

Malcolm provided handouts with a general overview, a road log, and the basic geologic history and structure of the Blue Ridge and surrounding area. The handouts may be accessed here:

Top photo shows Jerry checking out the metamorphosed sedimentary rock at the Weverton formation. Below he is at the Loft Mountain Overlook Catoctin formation greenstone. Photos by Malcolm. 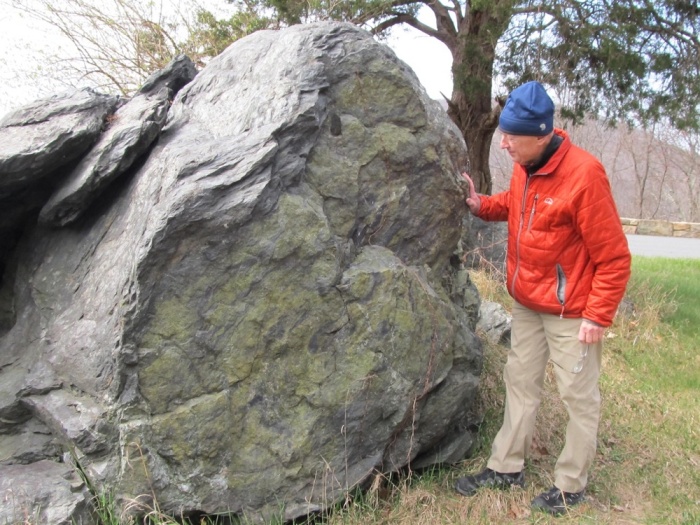