Headwaters Master Naturalist Byron Hukee took advantage of a unique opportunity to help scientists further our knowledge of the endangered California Condor.  Many thanks to him for sharing his experience here.

My affinity for the California condor (Gymnogyps californianus) began in 2008 after moving back to Utah when I retired from the US Air Force. During a hike at Zion National Park, I saw and photographed two very large birds soaring high near the top of a canyon wall that turned out to be California condors. On a subsequent visit, I was fortunate enough to watch a condor glide out of the mist on a snowy day and perch on a dead tree near Angels Landing. I have always loved the recreational opportunities afforded there, especially visiting the five national parks found in Utah. Heading that list is Zion in the southern part of the state. I first visited Zion in 1977 when my wife and I took our young family on a tour of several western national parks while on leave from my military assignment in the Phoenix, AZ area. Sadly, our first visit to Zion was after the condor had already disappeared from that area.

It was soon apparent that without human intervention, California condors very likely would become extinct. With only 21 estimated wild condors remaining, a limited captive breeding program was begun in 1982 using eggs and chicks removed from the wild, and a single captured adult condor. During 1986 and early 1987, the nine remaining wild condors were captured to establish a more viable captive breeding program, and since mature female condors produce but one egg every two years, this process was going to take some time.

In 1987, the capture of the last 21 remaining California condors in the wild was completed. The first captive-reared birds were released in southern California in 1992. This was followed by the reintroduction of birds in Arizona at Vermilion Cliffs north of the Grand Canyon in 1996. Numerous releases at this site have followed and it is these birds that have found their way north to the Virgin River canyons of Zion NP. I have visited Zion NP numerous times since then and have been fortunate enough to see and photograph condors soaring above the canyon floor of Zion on many of these trips.

Fast forward to June 2017 when I was contacted by my good friends Christina Gebhard and Brian Schmidt both of whom work in the Bird Division of the National Museum of Natural History (USNM) on the Mall in Washington D.C. The USNM bird collection is the world’s third largest with about 640,000 specimens representing about 80% of the approximately 9,600 known species of birds. The reason for their contact was to see whether I wanted to serve as a volunteer on their team that would inventory and begin the initial processing of the preserved remains of more than 200 condors that had been previously held in cold storage at three different sites in the southwest US. Of course I quickly agreed to participate. The addition of these condor specimens would increase their California condor specimen count by about 400%.

My main duty during this week was to assist Christina Gebhard, Museum Specialist, in the enormous task of organizing all the birds received in multiple coolers from these three different places. We pulled them all out of the huge walk-in freezers at the Smithsonian Institution Museum Support Center (MSC) to sort and thaw. Once the birds were inventoried a unique preparation number tag was affixed to the specimen. These numbers correspond to numbers in a preparation book that I maintained for each team by writing down all the data as the specimens were prepared. 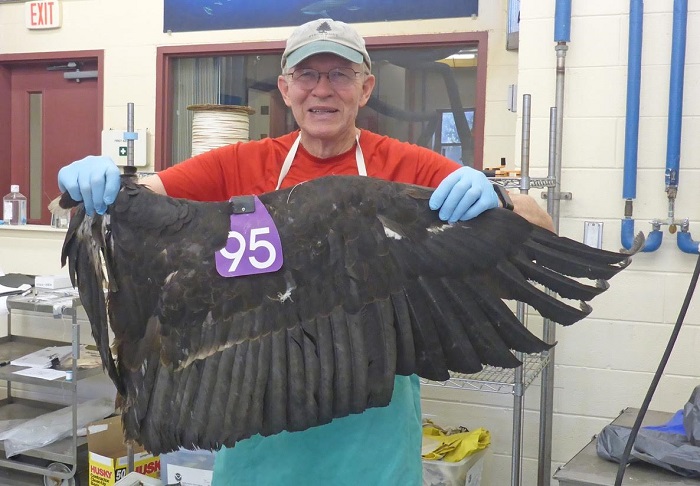 The condors ranged from eggs that did not hatch to mature adult birds and all had been necropsied. (A necropsy is an autopsy on an animal.) The condition of the adult birds varied from pristine to severely decomposed, some with detached or missing body parts due to the necropsy process or predation post mortem. A preliminary determination was then made as to which type of specimen preparation method would be best suited for each individual condor.

Feathers were saved in a “feather bag” (large slide-lock bag) from specimens for isotope work etc. Even the large bags provided were not large enough to hold the 24 inch primary feathers!

Once the processing began, many members of the division of Birds, including curators and fellows came to help with this huge task. I provided each processing team with the required labels depending on the method of specimen preparation, tissue tubes to save genetic material, feather bags or anything else needed to make the processing go smoothly.

The highlight of my week was that I prepared a spread wing, partial skeleton of a California condor that will be kept in the USNM bird collection in perpetuity with my name in the collection book as preparer.

The collection data for the California condor processed by Byron Hukee

During my three days working with the professionals of the USNM Bird Division, I gained an appreciation for the work required to actually produce a specimen suitable for research. I also gained insight as to the need for such museum specimens, most of which are never seen by the general public. Although all the condors I worked with were preserved remains of those birds that died since the beginning of the captive breeding program in 1982, I understand that other species are collected from living bird populations. Although some would say that it is inhumane to kill living birds for the purpose of a museum collection, this statement sums it up: “The carnage caused by domestic cats, glass windows, automobiles, and communications towers is far greater than the comparatively tiny numbers of birds collected by scientists each year (Banks 1979, Churcher and Lawton 1989, Klem 1990b).” – Kevin Winker, Journal of Field Ornithology, June 2000

I later assimilated all the known information from multiple studbook sources maintained by the condor projects in the US detailing the specifics relating to each individual condor specimen into one spreadsheet. It was a great help to the division of birds to have all the information in one place when the specimens were cataloged in the database.

Top photo: The California condor has a wingspan of 3 meters and weighs 12 kilograms making it the largest in span and second only to the trumpeter swan in weight.

All photos and captions provided by Byron Hukee.

More here: (Click on a photo below to see its entire caption, and turn the set of photos into a slide show.) 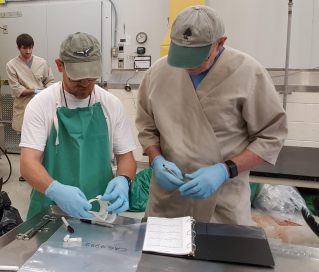 Brian Schmidt, a museum specialist in the Division of Birds at NMNH gives Byron some OJT (on the job training) 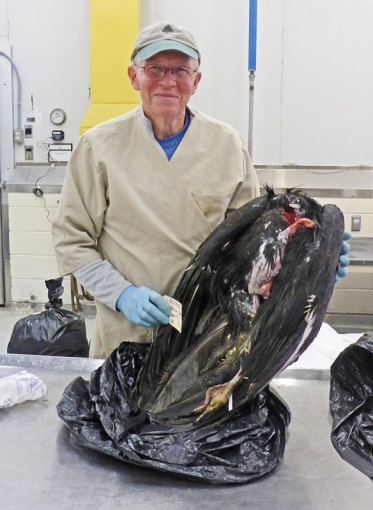 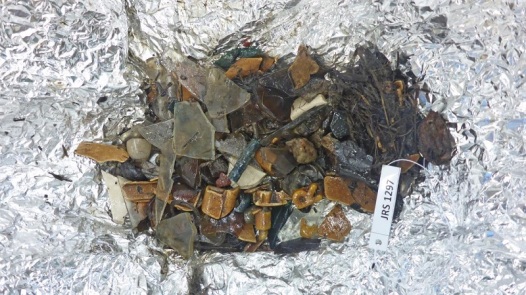 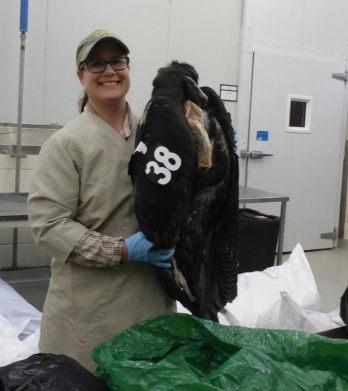 Christina Gebhard, a museum specialist in the Division of Birds at NMNH, shows condor with tag #38