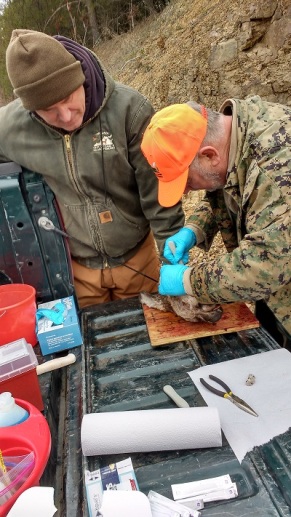 Saturday, November 26 was a long and cold day for me hanging out beside a remote country store in Fort Valley, VA. Working from the back of a pick up, surrounded by bags of deer heads, self-conscious of the “Choose Vegan” sticker on my car window, I was way out of my element welcoming camo-clad hunters toting fresh deer kills in their giant trucks. But somehow, I had a blast!

Virginia Department of Game and Inland Fisheries’ Wildlife Veterinarian Megan Kirchgessner had put out a call for volunteers to staff chronic wasting disease (CWD) check stations in the 4 county area comprising Virginia’s CWD containment area. On the first two Saturdays of the general firearms season, this year November 19 and 26, all deer killed by hunters are sampled for CWD.

Chronic wasting disease has been creeping into Virginia deer from West Virginia at the Frederick County/ Hampshire County border. Thirteen cases over seven years have spurred the VDGIF’s vigilance in monitoring deer. Samples are taken from deer killed by hunters in addition to some road-killed deer. Learn more about VDGIF’s tracking of chronic wasting disease from their website here.

VDGIF volunteers Dan Lovelace and Gordon Judd, both from the Region 2 Forest Office near Lynchburg, were my personable and experienced companions for the day. Dan has staffed these stations before. A lot. He taught Gordon and me how to age deer by examining their teeth, how to collect retropharyngeal lymph nodes by slicing open the necks with a giant (very sharp) scalpel blade (these lymph nodes are much bigger in rutting bucks than does), how to collect tongue tissue to test for Bluetongue virus and collect free blood in the chest cavities to test for Epizootic Hemorrhagic Disease (together referred to as Hemorrhagic Disease). The samples are tracked using numbers generated on a data card filled out for each deer carcass.

It will take 4-6 weeks before the test results are in but there are no known concerns with human exposure to the chronic wasting disease pathogens so these results would not effect the use of the deer carcasses.

Some of the hunters coming by the station felt the deer populations were down this year, maybe from more bear in the area, but did not seem too concerned about CWD. Found only in members of the deer family, its effects are slow and insidious and not yet visible here. Preventing its spread has a better chance of success than eliminating it once it is established.

Now that I know the procedure, I’ll be even better prepared to do this again next year!

This prize buck was going to a taxidermist so samples for CWD will be collected from them so as not to damage the carcass.