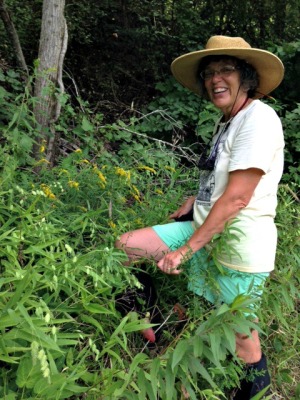 On August 19, 2016, Chris Bowlen and Kathy Byers, two members of Headwaters Team 1 for the RareQuest project, launched an adventurous kayaking trip to find a rare species of goldenrod in Page County, VA. The team was anxious for success as one rare bird and another plant species had eluded the team earlier in the year.

River Rock Goldenrod was known to prefer rocky areas along the river.  On previous trips, the steep, trail-less and heavily overgrown hillside had proven challenging and less than optimal for locating the plant. Chris and Kathy volunteered to attempt using kayaks to access the area. The trip would require shuttling vehicles, paddling five miles just to reach the designated area, and the inherent challenge of riffles and rapids along the way. Kathy’s slight apprehensions were eased by Chris’ extensive river experience and wild flower expertise. And who could say “no” to spending a summer day on the river?

The morning was spent counting turtles, identifying birds and following Chris’ lead through the faster moving areas of the river. Sixteen turtles, several wood ducks and one 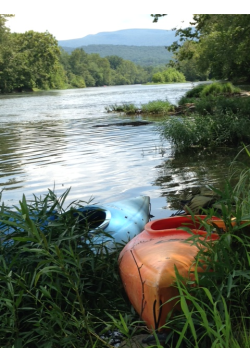 capsized kayak later, the designated area was reached. The two team members donned boots and gaiters and began searching for Solidago rupestris. After discounting a few close relatives, one group of goldenrod drew hopeful, detailed examination. It was decided that the plant did possess the identifying characteristics of the target species and a short celebratory happy dance, complete with boots and gaiters ensued. Several pictures were taken for documentation, kayaks were loaded on to the truck and the tired paddlers headed for home. With the possibility of success, the planning and effort of the trip now seemed even more worthwhile. A few days later, the plant identification was confirmed by Christopher Ludwig, chief biologist of the project. Solidago rupestris would remain on the list of plants found in Virginia and Headwaters Team 1 would look forward to their next assignment.