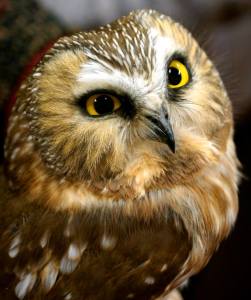 Always looking for something upbeat to write about for Headwaters Highlights and a true highlight of our many chapter activities is the Saw-whet Owl banding in November at the Highland Retreat in Bergton, Virginia – just a few miles shy of the West Virginia border.  2014 marked the fourth year Headwaters has made the trek to the foothills of the Appalachians to hike to the nets and return to the banding station with our bagged birds to learn what we may about this tiny, phlegmatic owl. See below for background on this banding station.

This year I was determined that the Trainees in Waiting not miss this opportunity just because we postponed their class until spring.  To make sure everyone had a chance, we did two trips to Bergton, and I believe we got everyone but Stephan and he doesn’t do nighttime stuff very well – so that worked out ok after all.  Maybe he will feel up to it in November 2015 … if Clair and Zig do, that is.

Lacey Dean and her husband Brian, Sandi Rose and I met Mary Jane May (a new potential trainee) and her son at the Retreat on the evening of Sunday, November 9th.  On the following Saturday evening, Betty Gatewood and her husband Mark, Brian Lux and I met Kathy Byers and her friend Mary Jo, Elaine Smith and her friend Rinn and Janet James with her husband Tom and daughter Jenna to car pool to Highland.  Already there were Byron Hukee and Anna Maria Johnson (along with her children and photographer husband, Steven).  We were very fortunate to have several owls for each of our Headwaters trips.  Everyone who desired to do so, got the chance to hold/touch these night time wonders.  There was a bit more beak clicking compared to other years and no one knows the reason.  Younger birds?  Birds previously netted and irritated to have to go through it again?  Nevertheless, there is no serious aggression in these tiny tufts of death on wings – unless you are a mouse.  Some birds had been netted only a day or two previously, so they had been hanging out at the Retreat.  Maybe the mouse population attracted them?  If you touch the needle-point talon of a Saw-whet, you’ll know a mouse doesn’t have a chance once embraced.

Steven David Johnson got some amazing photographs, and we shared some hot spiced tea and various treats with our “banding masters” Clair Mellinger and Charles Ziegenfus.  As always they did an amazing job of instructing us on the banding project and the actual procedure of weighing, measuring, sexing and banding/recording each owl.  I got to see a bit more of the owl release this year and to watch but not hear the lift off is something to be experienced.  Clair showed us the “toothed” primary-feather edge of the owl’s wing that allows for this silent ascent into the night.

It was another smash hit with all – original class members, mid-way class members and the newest and yet to be members of our Headwaters group.  These newest are a raring to go – can’t wait for spring bunch!  I guess I’m gonna have to do some more events to keep them fired up – but more on that when I figure out what it will be!  Any ideas out there?

A third evening of banding was attended by Headwaters Master Naturalists Ann Murray, Judy Tammi and Chip Brown, accompanied by the Augusta County Nature Nuts 4-H Club. Ann offered this report: The Nature Nuts attended Dr. Mellinger’s Saw-whet Owl banding Nov. 14th. We had eight children plus Judy, Ann, two parents and Chip helping out. Thank you, Chip. You never know when you might need extra help with kids. The kids all hiked to the top of the mountain after learning about the owls and holding them. Dr. Mellinger is patient with owls and children! The children will probably never forget these owls. We are molding future naturalists.

More of Byron Hukee’s photos from the November 15, 2014, Saw-whet Owl banding evening are below. Thanks to Byron for the photos and accompanying captions! Click on the photos to get the full captions. Rockingham Bird Club member Diane Lepkowski has more photos, and videos, from previous banding events on SmugMug here.

A research assistant removes a captured Northern Saw-whet Owl from a capture net.

The different types of flight feathers of the Northern Saw-whet Owl are displayed.

Handling the Northern Saw-whet Owl is not without its hazards.

The capture data sheet is used to record specifics about captured owls. This female was previously banded about two weeks prior to its recapture. Body weight and size as determined by wing length are the manner by which sex is determined, the females being larger than the males.

The bioluminescence on the underside of the wing is revealed with ultraviolet lighting.

An admirer has a chance to interact with the Northern Saw-whet Owl following the formal part of the presentation.

For more background on the Highland Retreat Saw-whet Owl banding station, see the article below by Yulee Larner from 2007.

Northern Saw-whet Owls are rare fall transients and winter residents in Augusta County,VA; we have only seven records, of which four were road-kills or injured birds. To learn more about this rare species, Dr. Clair Mellinger, a biology professor at Eastern Mennonite University, initiated a Saw-whet Owl banding station in 2001, at the Highland Retreat Camp, near Bergton, less than 0.5 mile from the West Virginia Line.

The Bird Banding Lab at Patuxent, MD supplies the bands and the data are submitted to them. Dr. Charles Ziegenfus, professor at James Madison University, joined Mellinger in this effort in 2003.

Their goal is to open the banding station every night in November, weather permitting, beginning about 6 PM and continuing at least until midnight.

Along a wooded ridge, they erect a row of six 12-meter nets, strung end to end. In the middle of the net row are two speakers that run a tape deck playing the beep-beep-beep call of the male Saw-whet Owl. Migrating birds hearing the taped call fly into the net. They are removed from the nets, taken to a room in the house where they are measured for weight, wing length, tail length, and bill length. Then the birds are released to continue their migration, or possibly to remain in our mountains through the winter, especially at high elevations.

This year has been an irruption year for the tiny, robin-size Saw-whet Owls, at least in eastern United States. Since opening the Rockingham County banding station, the season totals range from 49 in 2002 to 157 in 2004. During the first five days this November, they banded almost 150 owls, a number comparable to a complete month in previous years. The banding records indicate that Saw-whet Owls are more common in fall in our region than we thought previously.

There are more than eighty banding sites throughout the United States and Canada, including five in Virginia’s Piedmont and Coastal Plain. This station is the first in our Mountains and Valleys Region. This year, Mellinger and Ziegenfus banded about 220 birds. In addition to newly banded birds, they trapped thirteen that were banded previously at other stations. An amazing fact is that one that was banded at Mellinger’s station on November 24, 2006 was recaptured on November 24, 2007! Just one of the wonders in the world of birds.