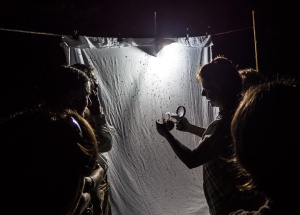 Held at the confluence of the North and Dry Rivers

Rescheduling the canceled Bug Dance at Wildwood Park proved to be quite a challenge, but we managed in the end to match availability dates and a fantastic location at the confluence of the North and Dry Rivers in Bridgewater on the evening of September 5th.

We all met on the property of Shelia and Sanford Helmuth situated on the banks of the North River. Chapter Vice-President and Program Chair Ann Murray brought wood and quickly made and excellent fire so we could roast the s’mores for which she also brought the ingredients. Headwaters member Janet James brought her daughter Jenna and her husband Tom Benzing. Other Headwaters members participating were Stephanie Gardner, Judy Tammi and RoxAnna Theiss. Joining in on the fun were some of our “Trainees in Waiting”: Stephen Pietrowski who discovered he lived on the same street in Staunton as our entomologist, Brian Lux and Kathy Byers who carpooled together from Harrisonburg as well as Anna Maria Johnson and her nature photographer husband Steven.

Our entomologist, Edie Kretch, instructed us on the variety of flying insects attracted to the Mercury Vapor light set up with a white sheet to aid in identification. We saw several species of adult caddisfly – Jenna Benzing is skilled at these identifications. The caddisflies are an order, Trichoptera, of insects with approximately 12,000 described species. Caddisflies have aquatic larvae and are found in a wide variety of water habitats. These macro-invertebrate larvae are among those used to determine stream health in our benthic monitoring projects. The larvae of many species use silk to make protective cases of gravel, sand, twigs or other debris.

We also saw several species of the Geometrids and a variety of small beetles and moths – like the leafrollers. Although we collected a variety of our bugs in glass jars and used magnifying glasses to help examine them, identification was difficult no matter how hard RoxAnna tried to find them on her laptop at the Encyclopedia of Life website. We did learn something about life cycles, insect anatomy and habitat ecology though. The big bugs did not come to our sheet that night but we got to know each other better and we also had fun roasting and eating our s’mores.

It was a good evening for bugs and Headwaters.

Find more photos of the event by Steven David Johnson on the Headwaters Chapter facebook group page. Please join the group if you haven’t yet. The photos are probably not visible to you otherwise.