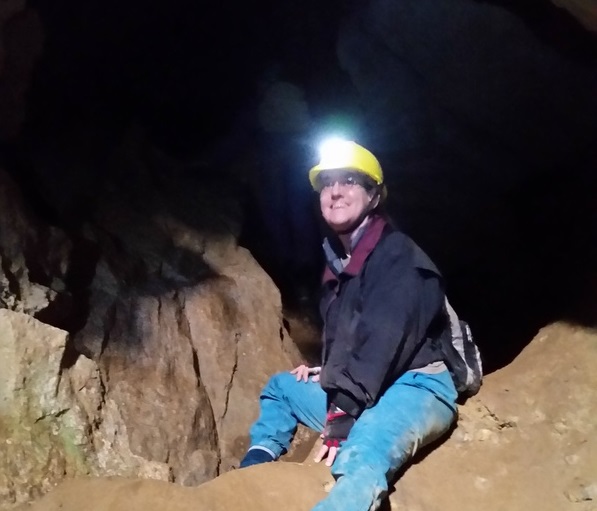 On Tuesday, March 21, six HMNs (including three members of this year’s training class) joined host Brian Lux and our guide, Daniel Greenawalt, on a caving adventure. Our destination was Church Mountain Cave, located off Runion’s Creek Road in Rockingham County.

After parking the cars, a short hike up a logging road and a section of trail led to the cave entrance, which is at the top of steep climb. The opening is wide, with a scramble down into a fairly large room. Because of the size of the opening, there is a lot of light coming into this room. Consequently, some of the rocks are covered with bright emerald-green mold, something you rarely see in wild caves.

The part of the cave that we saw is pretty dry, which means the formations are not actively growing. Nonetheless, we saw a few, notably a large column—that is, a stalagmite and stalactite that have grown so long that they touch, making a single formation. This particular column appears to have settled at some point, leaving a three-inch gap about a foot below the ceiling.
We also saw fossils embedded in the rock. The floor of the Shenandoah Valley features a thick layer of limestone, which is why there are so many caves here: surface water is slightly acidic from contact with carbon dioxide in the air and with organic material in the soil. This slightly acid water slowly dissolves the limestone, forming underground caverns. The fossils are there because the rock itself formed at the bottom of an ocean that was here before the collision of continents that created the Appalachian Mountains.

Having explored the big room, some of us chose to follow Daniel down into the lower section of the cave. This part was also quite dry, which made easier going, since the mud which covers most of the floor is not so slippery. We eventually worked our way down to a small stream. The cave continues in several directions at this point, but we decided not to explore any further, as the passages got quite tight. Instead, we all turned out our lights for a few minutes in order to experience total darkness.

At this point, we began the short climb back out of the cave. Some in our group had never before been in a “wild” cave, so this was a new experience. Thanks again to Daniel for being our guide, and to Brian for organizing!

Photos by Peggy Plass, Cohort IV. At top is Kate Guenther. Kristina Oates and Daniel Greenawalt are at the cave entrance in the second photo and the third one is of the big room.