Saturday October 21st and Sunday October 22nd were gorgeous days in Elkton, Virginia and the crowds at the annual Autumn Days festival took full advantage. There were an estimated 6,000 people in attendance on Saturday, and 3-4,000 on Sunday!

Rachael Baczynski organized and manned Headwaters Master Naturalist tables in the Kids’ Zone on both days. I came and helped out for a few hours each day, but Rachael did the lion’s share of the work! She put up the display board, provided chapter brochures and a sign-up sheet (we got several people sign up!), and had lots of different materials for people to look at. The HMN Outreach Committee loaned us a pair of binoculars and a bird call device which were both big hits. In addition we encouraged the kids to make pine cone bird feeders. We were so busy on Saturday that we went through two large tubs of shortening (Rachael wisely choose not to use peanut butter, taking into consideration any nut allergies) and all our paper bags! Peggy Plass came out Saturday and Sandy Greene joined us on Sunday for the fun. Thanks to them, and to everyone who contributed pine cones. We had plenty. Rachael is working on creative ideas for her holiday celebrations incorporating the leftover cones!

A photo of Sandy manning our pine cone table made it onto the front page of the October 26 edition of the Valley Banner! (Click on the image at right to see the article.) What a great way to expand Headwaters’ outreach into the eastern portion of Rockingham County! 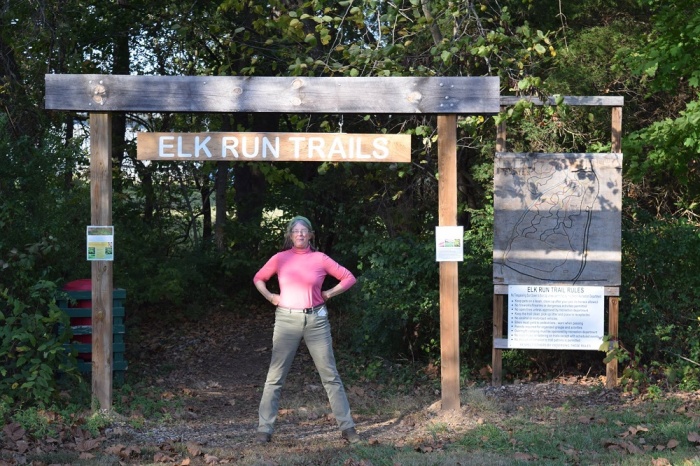 More photos of the HMN outreach at Elkton Autumn Days 2017: 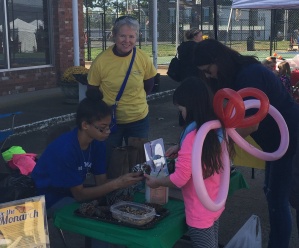 Elaine with Kai Franklin helping at the HMN table at the Kids Zone. Photo by Peggy Plass.

A festival-goer learns which birds make which calls at one of the HMN activity tables. 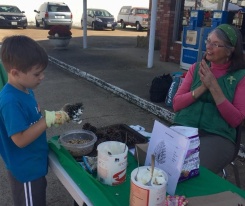 Sandy Greene watching over Mac Stabler’s work. Thanks to Bethany Stabler. for use of her photo.

Some of Rachael’s Girl Scouts visiting the HMN table. Photo by Rachael.